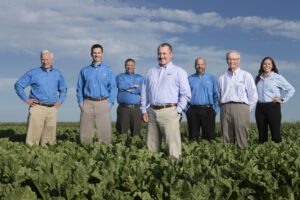 Come visit your American Federal Ag and Business Bankers at the Big Iron Farm Show September 10-12 at the Red River Valley Fairgrounds in West Fargo. Stop by our booth (C-14/C-15) in the Expo Center.

The 39th annual event is the region’s largest three-day gathering of its kind, offering a smorgasbord of educational programs, field demonstrations and 900 exhibitors.

Ag and Business Bankers from across the Red River Valley and Lakes Region will be on hand at the bank’s booth from 9 am to 5 pm.

Quarterly, the ABA ranks financial institutions in America based on ag loan volume and concentration.

American Federal has been listed as a leading farm lender in the United States by the ABA for several years in this decade.

When American Federal opened its doors for business in 1891 as a neighborhood association in East Grand Forks, it was at the heart of agriculture productivity in the Red River Valley.

During the past 128 years, that deep connection with the land and the farmers and ranchers has only grown. A testimonial to that growth and its trusted relationships with its clients comes in the form of American Federal being recognized as a Top Ag Lender in the United States.