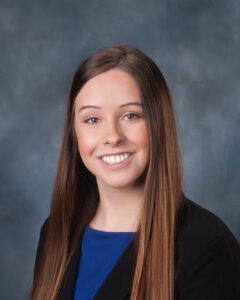 Paige C. Craigmile has been promoted to Ag and Business Banker at American Federal Bank in Wahpeton.

Paige is a graduate of North Dakota State University (NDSU) in Fargo, where she earned a Bachelor’s of Science Degree in Microbiology and Animal Science.

At NDSU, Paige served as President of the Collegiate Cattlewomen, was an Ambassador for the College of Agriculture, and Little International Beef Superintendent.

As a member of a collegiate meat judging team, she traveled the United States to observe a variety of agricultural operations.

She also served as a Research Assistant for the Agricultural Research Service of the U.S. Department of Agriculture in Fargo.

She is a member of Rotary International in Wahpeton-Breckenridge, serves on the club’s Board of Directors as Service Director and traveled with the local service club to Guatemala where Rotarians built a schoolhouse.