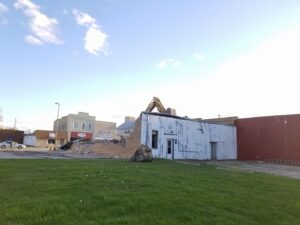 American Federal has owned the building for several years. It is adjacent to the bank’s parking lot and has housed a variety of businesses over the years, including a bakery, a grocery and a retail catalogue store.

The photo shows the rear of the Electronics building as it is being demolished.

In 2015, Hallock community leaders worked with a consultant to develop a three-year strategic plan to revitalize the downtown by moving businesses into empty viable buildings and razing buildings that are not viable.

The hole in the ground left from removal of the old building’s cellar is being filled in and gravel will be compacted on the top six inches. “We will hard surface the vacant lot for additional parking downtown,” Craigmile said.

“The second phase of the project is to evaluate how we can expand our existing Sales Office in Hallock,” Craigmile explained. “One option is to re-locate our drive-up to a different side of the American Federal Bank building.  Another option is an addition to the bank.  We will review several floor plans to see how we can best create additional space for our clients and our employees.”

Four Sales Bankers and four Associates are housed in the current 2,200-square-foot Hallock Sales Office. “We are using every available space in the building,” Craigmile said. “As we’ve grown, we find we would like more private office space and a conference room to meet with clients.