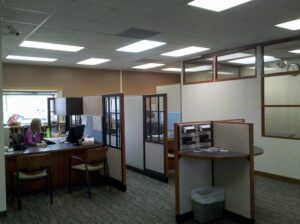 “First class,” “Really nice” and “This is awesome” are some of the comments American Federal is hearing from clients as they visit the Hallock bank for the first time since a major remodeling project of the facility was completed in late April.

The remodeling marks the first full refurbishing of the building since the bank was built and opened in June of 1979. Following a merger with the former Hallock Savings and Loan Association in 1976, the Hallock office was American Federal’s fourth branch location. It opened as American Federal in January of 1977 at 118 Second Street Southeast. Two and one-half years later, American Federal finished construction of its present bank building at 157 South Second Street in Hallock.

Not only are clients enjoying the new interior, employees are also pleased with the quality of the work space, according to Hallock Market President Paul Craigmile. “The remodel has had very positive impact on clients and staff alike.”

The project included new windows on the west, east and south elevations of the single-story brick bank building and complete refurbishing of the customer service area, including the lobby, Associate work stations and Sales Banker offices, with new carpet, high-end modular walls and furniture. The bank interior retained its three hard-wall offices; however, the rest of the floor space was reconfigured.

Especially attractive are the “earth tone” shades of the interior paint, wall covering and carpet shown in the photo.