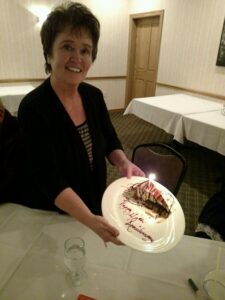 Fosston Associate Wanda Johnson celebrated her 40th Anniversary at American Federal with employees and spouses at a special dinner at the Fireside restaurant in Bagley, Minnesota.

Johnson has worked in the banking industry in Fosston and Erskine, Minnesota for 43 years, spending 40 of the years in the same two bank buildings in Fosston.

January 5, 2018 marked Johnson’s 40th Anniversary with American Federal through its acquisition of a bank in Fosston.

Johnson started her banking career at American State Bank of Erskine. Later, Johnson moved to Fosston and commuted to the bank in Erskine until she was offered a position at First Federal in Fosston.