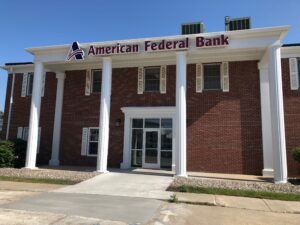 American Federal Bank in Wahpeton has completed its exterior reconstruction project, spurred last year by a severe thunderstorm system that rumbled through Wahpeton.

Early morning of the July 4th holiday, high winds ripped off two of the two-story columns on the south-facing façade of the American Federal Bank building at 615 Second Avenue North, damaged a corner ground sign, fencing and a tree, and spewed debris across the parking lot.

The damage was caused by a line of thunderstorms that moved across North Dakota and northern Minnesota, leading to multiple reports of high winds and property damage.

The storm damage in Wahpeton was centrally located along Dakota Avenue and a few blocks north. Large evergreens were uprooted and a greenhouse and its entire inventory of flowers at ACE Hardware were destroyed.

“At American Federal, everything white on the exterior of the bank building has been wrapped in new pre-finished metal siding,” explained Paige Craigmile, Ag and Business Banking Specialist.  All eight of the building’s original wood columns are replaced with maintenance-free, aluminum-fluted columns.

“Both of the bank’s entrances have new doors, and the entire first floor has new windows,” Paige said.

“The Drive-Up is reconfigured from three to two lanes to allow more space for our customers’ vehicles, especially farm and business trucks with wide sideview mirrors,” Paige added.

The reconstruction project was completed by Gast Construction and Crane Service, Wahpeton.